AI Tool Tracks the Time Politicians Spend on Their Phones 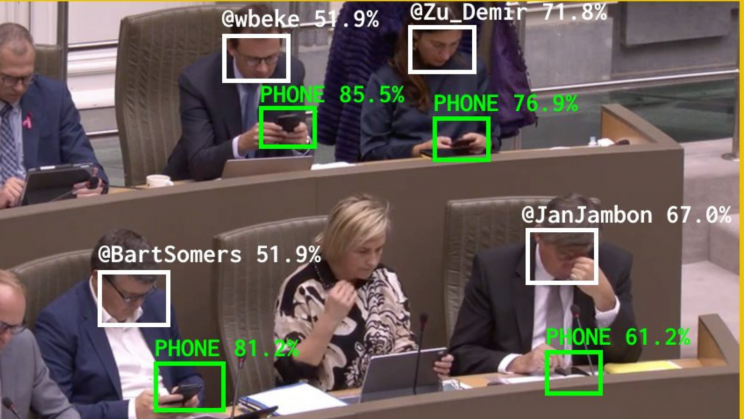 If you have been frustrated by the lack of interest your local representative shows during their work hours, here's a way to flag it now. Belgium-based developer, Dries Depoorter has created an artificial intelligence (AI) tool that calculates how much time are politicians distracted by their phones during meetings.

Called the Flemish Scrollers, the tool is written in Python and uses machine learning and face recognition technologies. The law of the land requires that all meetings of the Flemish government be in the public domain. The government broadcasts it live on its YouTube channel. The code uses face recognition to identify the politician and then tracks the amount of time they spend on their phones during the broadcast.

The tool went live only on July 5th but has caught the public eye. When contacted about the response to his tool, Depoorter said, „Most people are positive about this project. The negative comments are coming from politics.„

Depoorter told Gizmodo that he is happy to share his code that works with any type of video feed with other inquiring minds.  But the purpose of the tool is bigger than flagging distracted legislators.

Depoorter is an artist and creator of innovative works like DieWithMe, a chat app you can use only when you have a 5 percent battery, Surveillance Speaker, a rotating camera that describes everything it sees, and Jaywalking, a tool that allows reporting of jaywalkers from unprotected surveillance footage among many others.  His work is aimed at bringing to the fore the dangers associated with new technologies. Through the Flemish Scrollers project, he intends to highlight the issues with face recognition, AI, and privacy. Since the tool, targets lawmakers, it is likely to motivate them to act.

Citizens and technology have been trying to push back against invasions of privacy that have more intrusive during the pandemic. However, the efforts have legal backing only in some places. With projects like the Flemish Scrollers, Depoorter hopes this will change in the future.